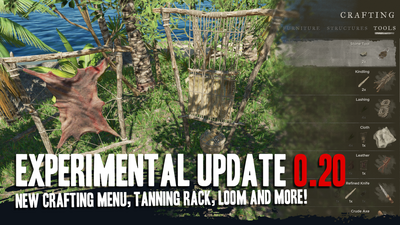 There’s also the new craftable Loom and Tanning Rack stations. These stations are standalone items like your Campfire and will also appear as ingredients for some craftable items like Cloth and the new Leather item. If one of these stations are within your crafting radius, they will count as a crafting material and you will be able to craft the more advanced items. Along with these two new stations are two new items - Rawhide and Leather. Rawhide is obtained from Boars and Sharks. With a Tanning Rack you can use the Rawhide materials to craft Leather in the Crafting Menu. Similarly, you can use the new Loom to turn Fibrous Leaves into Cloth. The crafting combos have been revised to use the new Leather material for most of the refined tools.

There’s also a new and better Shark spawning system with more consistent placement and spawning. We’re playing with some more interesting and dynamic Shark behaviours, like Sharks attacking your raft if you attack them!