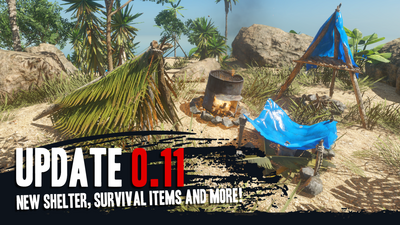 There are quite a few new items and gameplay tweaks. This build introduces new saving functionality and gameplay. From now on the only way you can save your progress is via a Shelter or Bed. This means shelter will be one of your biggest priorities when first starting the game.

Vitals have been adjusted and there is now more importance on your thirst. With the increased need for fresh water 2 new items have been added – a Water Still and a Water Collector. A Water Still is useful as a slow but sustainable source of fresh water, where the Water Collector can be used to boil and collect salt water. Along with thirst, a new vital has been added – Sleep. It’s pretty straightforward, you will need to sleep to maintain your sleep vital. If your sleep vital is depleted you will not be able to sprint.

A new way to preserve meats has also been added. A Smoker can be crafted and attached to a Fire Pit to allow you to smoke and preserve meats to prevent them from spoiling. Food that has been smoked will not spoil. It’s important to remember that this can take some time for larger meat. Crabs and Shark meat can take up to 12 hours to smoke so you will need to get them smoking fairly soon after catching so that the meat doesn't spoil before it is smoked.

The starting Water Bottle and Knife have been removed. You will now be required to create a basic Stone Tool to be able to cut down or harvest resources on an island. It’s a pretty rubbish tool but it will allow you to gather resources to create better tools. Drinkable Coconuts can now also be refilled like a Water Bottle, but with a smaller capacity. The Camp Fire’s mechanics have also changed slightly and the details are covered in the patch notes.