Vehicles refers to rafts and the gyrocopter in Stranded Deep. 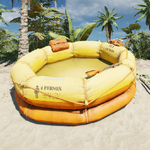 The Life Raft is the starting raft obtained from the Plane Crash. It cannot be crafted or found anywhere else in the World, which makes it essentially a unique item that can only be obtained in the start of the game. It is better than the Raft in the aspect that it is more 'stable' and less likely to 'flip' when sharks attack it.

The Life Raft is equipped with a Storage Container containing Rations, Compass, and a Bandage. It also has a deployable Sea Anchor which is used to stabilize the Life Raft and prevent it from floating away.

To 'control' the Life Raft, the user must equip the Paddle attached to the side of the Life Raft and interact with the Life Raft. This will position the user into the 'driving seat' and movement controls take over.

The Raft can be used to traverse water easily and safely. While the Raft is less stable then the Life Boat, it is approximately 1.5x faster (2x with a Boat Motor)[1].

As of 0.09 the building system is split into bases, floors and vehicles (propulsion). The base can be crafted from Barrels, Buoy Balls, or Tires found aboard Derelict Vessels and also Sticks. A floor constructed from Sticks or scrap materials can then be placed on top, and a propulsion system such as the Boat Motor or Sail can then be attached.

Storage crates can be transported by dragging them onto the surface of the raft. They will not slide off while the raft is in motion and the character will not collide with them when controlling the raft. However, they raise the center of mass, which can easily cause the raft to flip on waves.

Rafts can be Dragged by holding Right Mouse Button. This is useful for flipping a capsized raft, or bringing a raft onto the shore.

The Boat Motor is a craftable Raft extension, providing the fastest Raft propulsion.
The craftable components required for the Boat Motor can be found in Loot containers.

The Sail is a craftable Raft extension designed to accompany the Rudder. Provides propulsion in the direction it is placed.

The Rudder is a craftable Raft extension designed to accompany the Sail. Its primary function is to steer the raft.

The Anchor is a craftable Raft extension designed to prevent movement from currents and tides.
When the Anchor is deployed, the raft is fixed into its position.

Raft Bases are the foundations for rafts, and are required for Floors and Raft extensions to be placed.

Raft Floors are the foundation for Raft extensions such as the Sail. They can only be placed on Raft Bases.

The gyrocopter is a flying machine, similar to a helicopter. It allows the players to fly around, to and from Islands. Uses a substantial amount of fuel.